An Enduring Covenant Between

The People of the United Kingdom Her Majesty's Government

The first duty of Government is the defence of the realm. Our Armed Forces fulfil that responsibility on behalf of the Government sacrificing some civilian freedoms, facing danger and, sometimes, suffering serious injury or death as a result of their duty. Families also play a vital role in supporting the operational effectiveness of our Armed Forces. In return, the whole nation has a moral obligation to the members of the Naval Service, the Army and the Royal Air Force, together with their families. They deserve our respect and support, and fair treatment.

Those who serve in the Armed Forces, whether Regular or Reserve, those who have served in the past and their families, should face no disadvantage compared to other citizens in the provision of public and commercial services. Special consideration is appropriate in some cases, especially for those who have given most such as the injured and the bereaved.

This obligation involves the whole of society: it includes voluntary and charitable bodies, private organisations, and the actions of individuals in supporting the Armed Forces. Recognising those who have performed military duty unites the country and demonstrates the value of their contribution. This has no greater expression than in upholding this Covenant.

MOD Coining it in !!

An Officially Licensed set of 12 British Army Commemoratives coins/medals paying tribute to our troops past and present. Approved at the Ministry of Defence in Whitehall, the design for each commemorative is the meticulous work of ex-soldier and MOD illustrator Rupert Godesen and features modern facets of the British Army.

The set is Exclusive to The Westminster Collection and is Limited to just 495 worldwide. Each reverse features a modern facet of the British Army enhanced in 24 Carat Gold ink for artistic parts of the design, which include:

The obverse of each commemorative carries the Official crossed swords insignia of the British Army enhanced with 24 carat gold ink and comes complete with numbered Certificate of Authenticity in a Deluxe Velvet Presentation Case.

The wait to discover whether or not Sir John Holmes will recommend an NDM is likely to go on until at least Christmas (2013).  We have unofficial confirmation this is the expectation of the independent review team.

The implication is that the reviews work is complete and is now in the hands of Government and its civil servants to handle and dictate what happens next.  They will decide when the recommendations are put into the public domain and we will in turn learn our fate.

We have asked the cabinet office again for a timetable, as soon as we receive a reply we will publish it here on the Blog and Twitter.

The end appears to be in sight !!

Royal Air Force personnel from IX (Bomber) Squadron, based at RAF Marham in Norfolk, have become the first to receive medals for their part in the NATO-led Libya operation last year.

The airmen were presented with NATO's Non-Article 5 Operation UNIFIED PROTECTOR medals. The Queen graciously approved the wearing of the NATO-issued medal by personnel from all Services who had taken part in the Libya operation. IX (Bomber) Squadron were the first RAF fast jet squadron to participate in Operation ELLAMY (the UK's name for its contribution to UNIFIED PROTECTOR).

They launched Storm Shadow missile strike missions from their base in Norfolk, the 3,000-mile (4,800km) round trips being the first RAF strike missions launched from the UK since the Second World War. It was therefore fitting that the squadron were the first to receive the medal.

We were put on internal security duties; we supplied guards, road blocks, patrols and even firing squads. Hamburg, as one of Germany’s major ports, had been devastated by allied bombing and was in a terrible state.

That winter of 1945 -46 was to be the worst in Germany in living memory. One of our worst headaches were displaced persons, some of whom had formed themselves into gangs and roamed the outlying areas. We called them the werewolves. They looted, raped and killed and were the worst bunch of cut-throats I ever came across. They comprised mainly Eastern Europeans: Poles, Hungarians, Rumanians, Russian army deserters. They were, for the most part, young men and women who had escaped from concentration and forced labour camps. Naturally they were well armed: the only commodity Germany had a glut of was arms and ammunition. Rounding them up was a tricky operation. We were mainly under the command of the military police; the local Provost Major was God and those identified as murderers and rapists were summarily shot. No doubt injustices were done but when one saw the havoc and atrocities these gangs perpetrated, ones conscience was clean.

A short extract from the book “The Honour and the Shame” 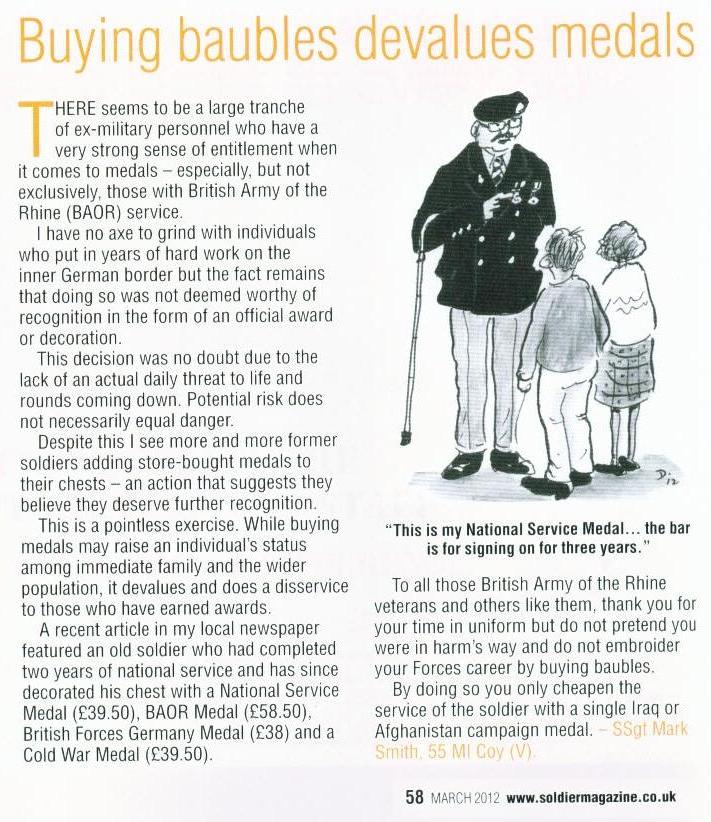 The new government are continuing to make appointments. Below is how the new defence team is taking shape:

Secretary of State for Defence

Minister of State for the Armed Forces

Under Secretary of State and the Lords Spokesman on Defence

We will keep you posted:

Your say on the MoD

The MOD has begun a process which will lead to a Strategic Defence Review early in the next Parliament.

As part of this process questions are being asked via a public poll conducted by a leading market research company. We would like to ensure that the largest number of people possible get an opportunity to contribute their thoughts and they really get a feel for your opinions.

It is a good opportunity to give your verdict on MoD performance, and it only takes a couple of minutes:

Andrew Marr is to interview Sir Jock Stirrup on Sunday morning 8 Nov. The BBC are requesting questions from viewers for Sir Jock here:

A chance to ask about the broken Military Covenant and a role the NDM could play in help fixing it?

Three members of the UK armed forces have been hospitalised following an incident in the Falkland Islands, the Ministry of Defence has said.

The incident took place on 27 October and the three, reportedly soldiers, were immediately airlifted to King Edward Hospital in Stanley.

One of the casualties - reportedly from the Royal Regiment of Scotland - is being medically evacuated to the UK, he is said to be in a serious condition.

The Daily Telegraph said they were shot during a live firing training session.

The three are reported to have been hit by automatic fire during a platoon live firing training practice session on the Onion Range, land which is used for training by the Army and located on a remote part of East Falkland island.

Companies are regularly posted to the islands for protection duties and training.

The MoD has also said that the soldiers' next of kin have been informed and an investigation is ongoing.

It reminds us all of the daily risks of service life.  The Falklands is still classed as an operational tour.  More